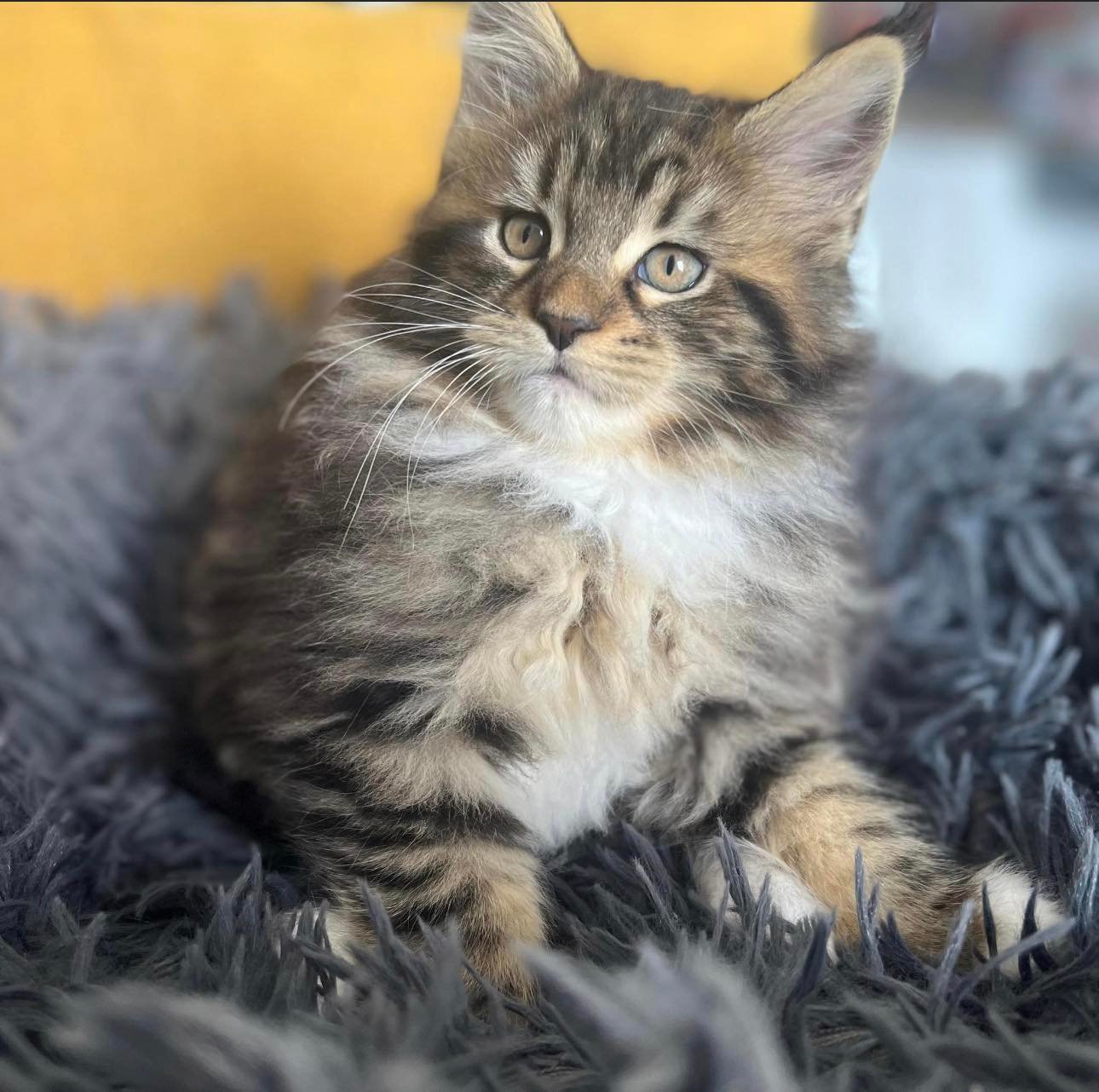 The Maine Coon is probably one of the oldest natural breeds in North America. Several legends describe the origins of the breed. The most widespread tells that the maine coon is the result of a cross between cats and raccoons (colloquially coon in English, abbreviated racoon), which would explain their color (the most common is the brown tabby, that is to say brown tabby) and their very bushy tail. Of course, it is genetically impossible to make such a hybrid, but the breed keeps from this legend its name. The second argues that the Maine Coon is a descendant of the six angora cats sent by Marie Antoinette of Austria while she was preparing her escape to escape the French Revolution. These angoras were reportedly brought on Captain Samuel Clough de Wiscasset's boat Sally along with the Queen's other personal belongings. The angoras would then have mingled with local farm cats to give birth to the Maine Coon. Another theory is that the breed developed from crosses between local farm cats and other long- or medium-haired cats first imported by the Vikings around the year 1000. The Maine Coon would then descend from the Norwegian forest cat, which would explain their resemblance. This hypothesis is supported by the resemblance between Van Turks, Siberians, Norwegians and finally Maine Coons whose geographical origins correspond to the movements of the Vikings. This resemblance to Norwegian can also be explained by the fact that the winter climate of New England and Norway are identical and would therefore have led to the selection of the same physical specificities. 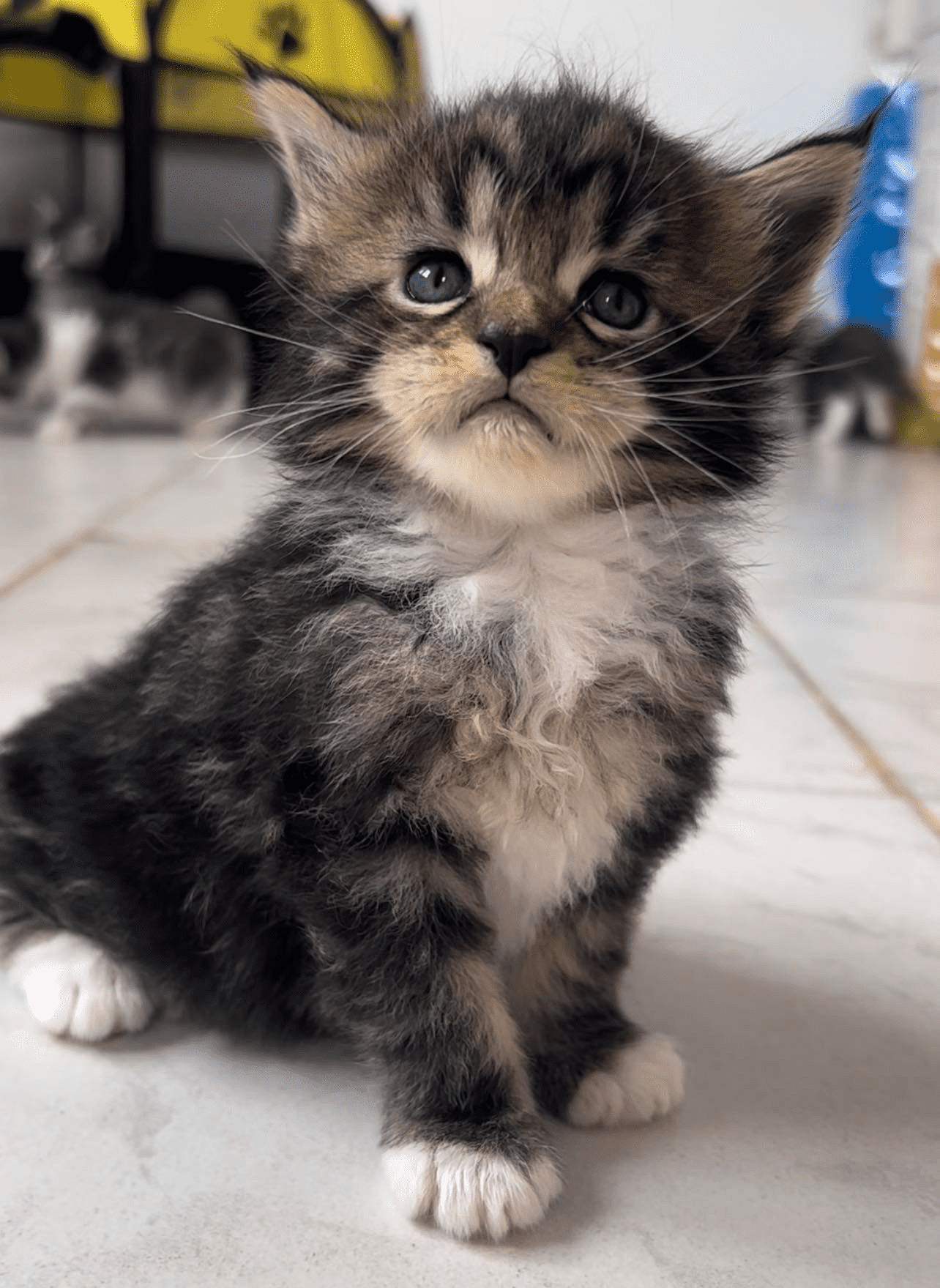 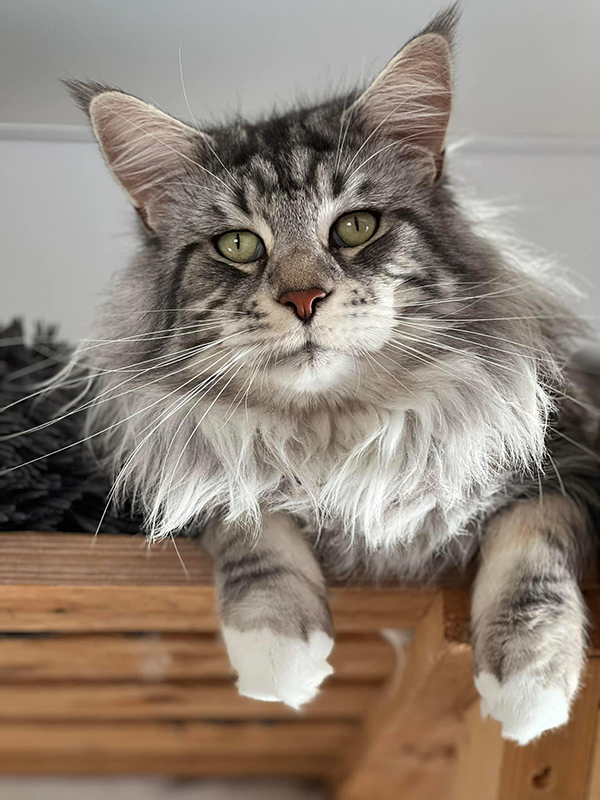 In the nineteenth century, Mrs. Pierce, one of the first owners of Maine Coon also hypothesized that these cats arrived on the shores of Maine by sea, not thanks to the Vikings, but rather by the wealthy families of Maine who then owned luxurious boats and traveled extensively.
They would have brought back from their expeditions many exotic pets, especially to amuse the children. Mrs. Pierce's second hypothesis was that angora cats were loaded aboard merchant ships to hunt rats. In both cases, they would have landed on the East Coast and mixed with local short-haired cats. Another possibility is that they were imported by European immigrants and were able to adapt to the living conditions and difficult climate of the region.

The Maine Coon cat is a cat with great qualities: safety, kindness and fidelity Despite its size, it is a big peaceful cat, its kindness appearing in its very gentle look, and it can be said that it is as good as it is tall. The Maine Coon is considered one of the largest known cat breeds, it stands out for its intelligence, outgoing personality and sociability. It is an excellent pet that enjoys different environments. Its imposing body makes all the particularity of the Maine Coon. Belonging to the very closed circle of the largest cats in the world, it has a balanced silhouette with impressive musculature, a wide chest and a rectangular and long body.

The Maine Coon is characterized by its powerful musculature and long size, its body can measure up to one meter long. Its growth lasts between 3 and 5 years, reaching a weight between 6 and 9 kg for males and between 4 and 6 kg for females. A more or less square and medium-sized head, oval and unslanted eyes, prominent cheekbones, a square and strong muzzle are among the other physical specificities of the Maine Coon.    This cat has medium-long hair with a silky texture. It has a traditional dress in a wide range of colors with the exception of cinnamon, lilac, chocolate and fawn. Tabby brown and marbled brown are the most popular. Book a Maine Coon kitten 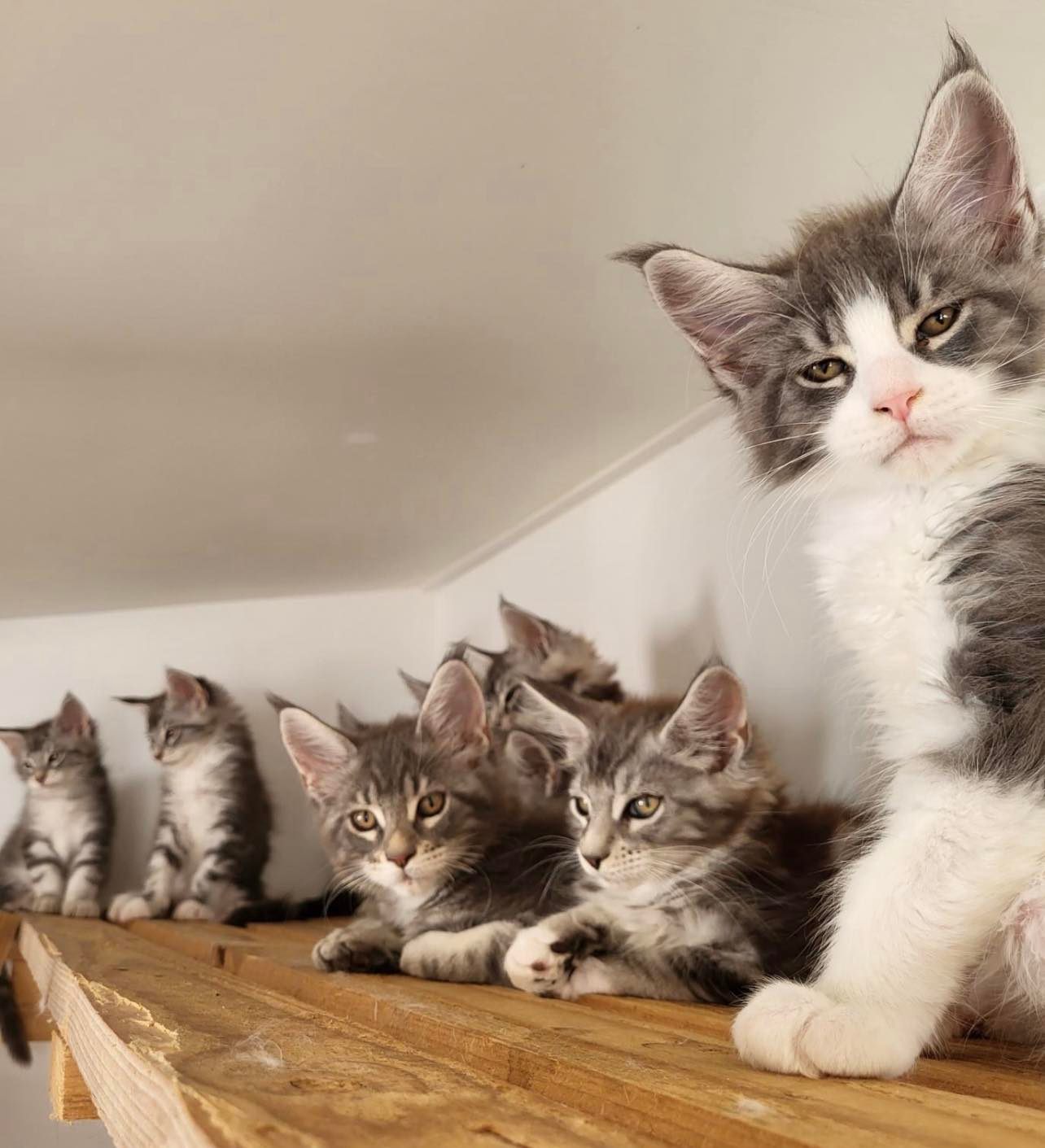 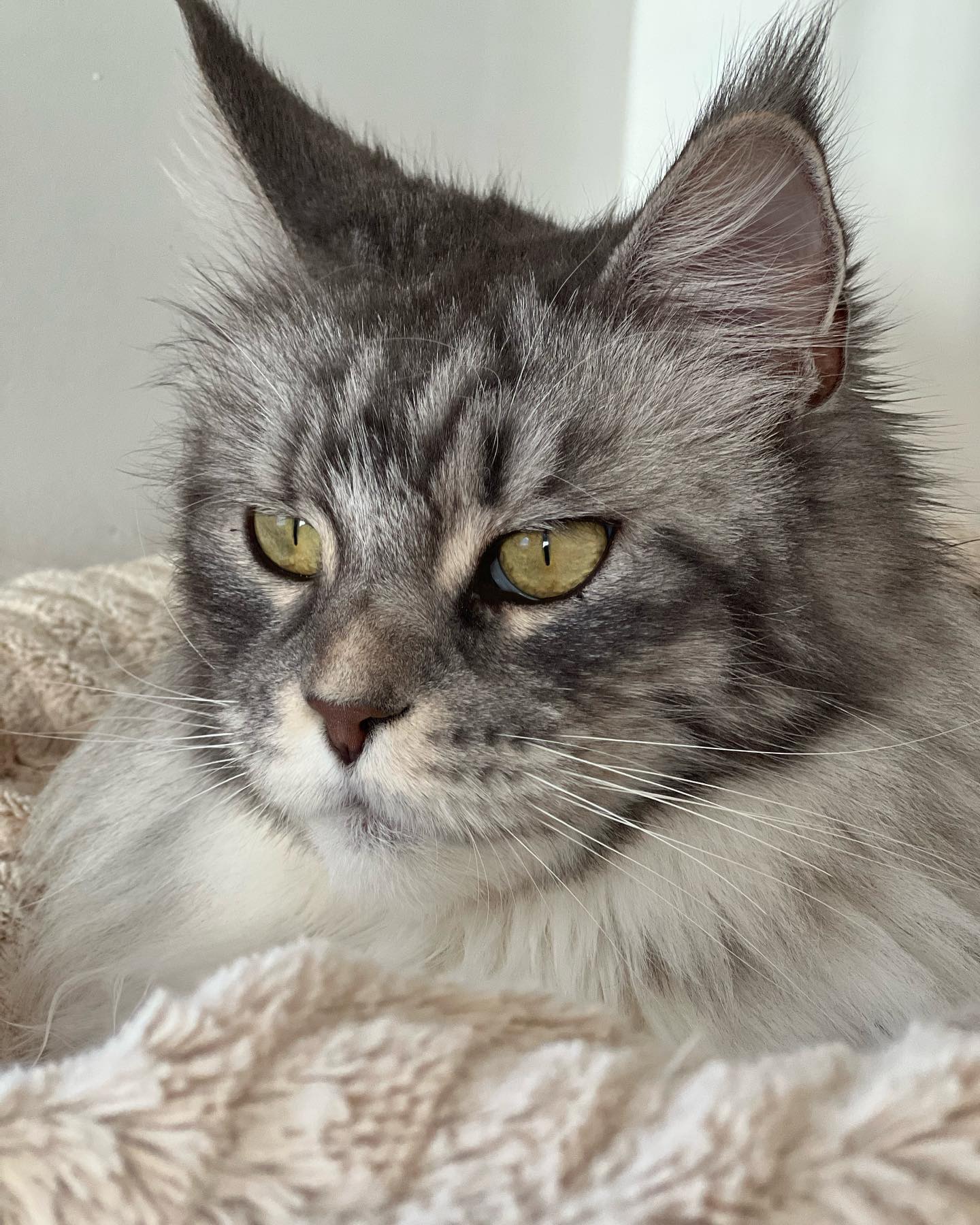 Rymel, registered in the LOOF,  is Blue 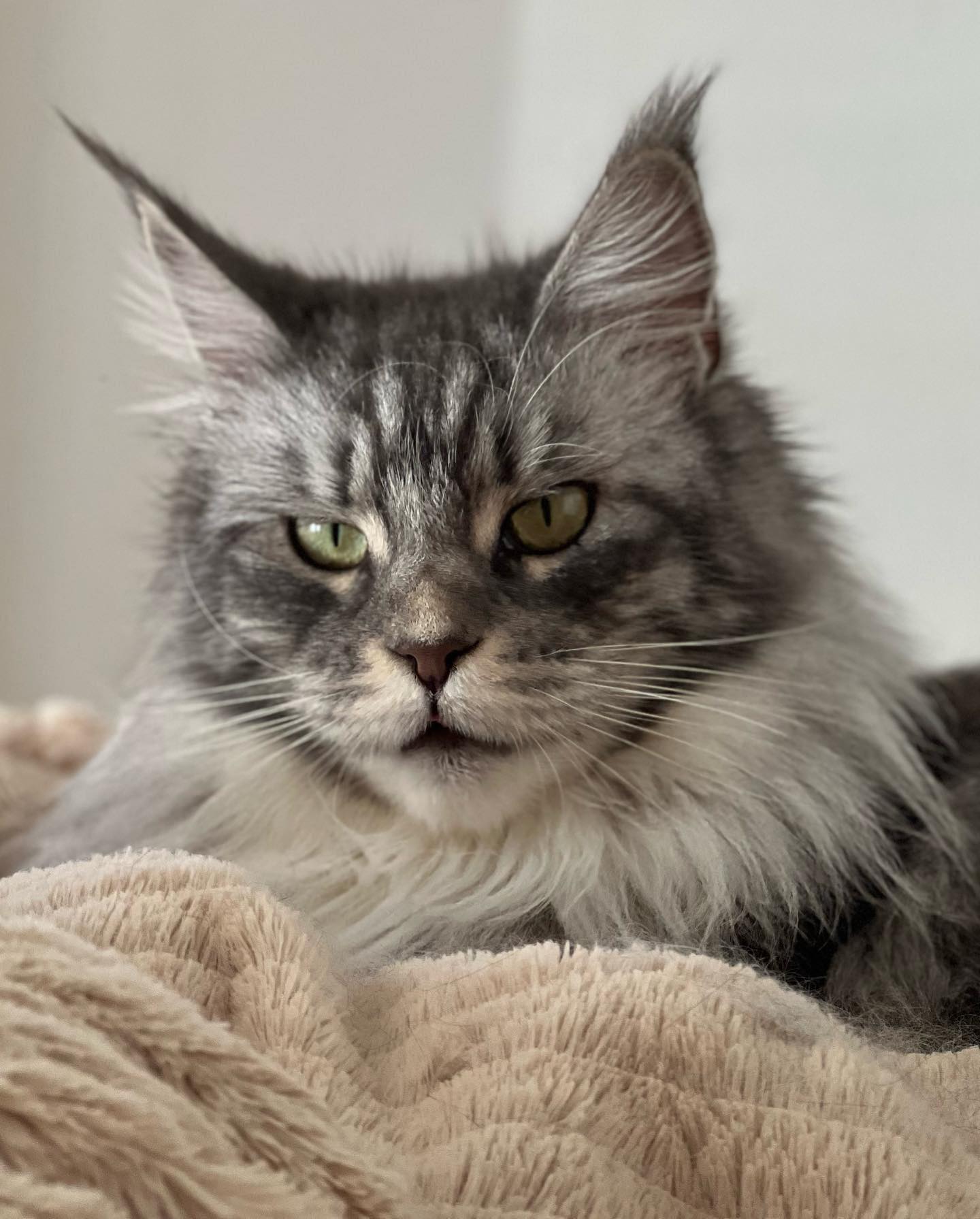 Silver Blotched Tabby and White.  She has a unique wild look and I am very much in awe of her beauty...  It is of a very beautiful size. Rymel is extraordinary, an extraordinary guy and she has all the physical assets, a real Cheerleader.  She is from the Maine domain of Abolta and comes from parents of a prestigious lineage as well as many Champions of France,  international and European (his mother Perle de la croix Lorraine and his father Obiwan des coons de soultant). From sublime lineages selected for several generations for their great beauty.

Rymel is a very attached female to me, she is extremely affectionate and even tends to be extremely clingy. She is also very playful and her peaceful character and patience make her excellent company for children. 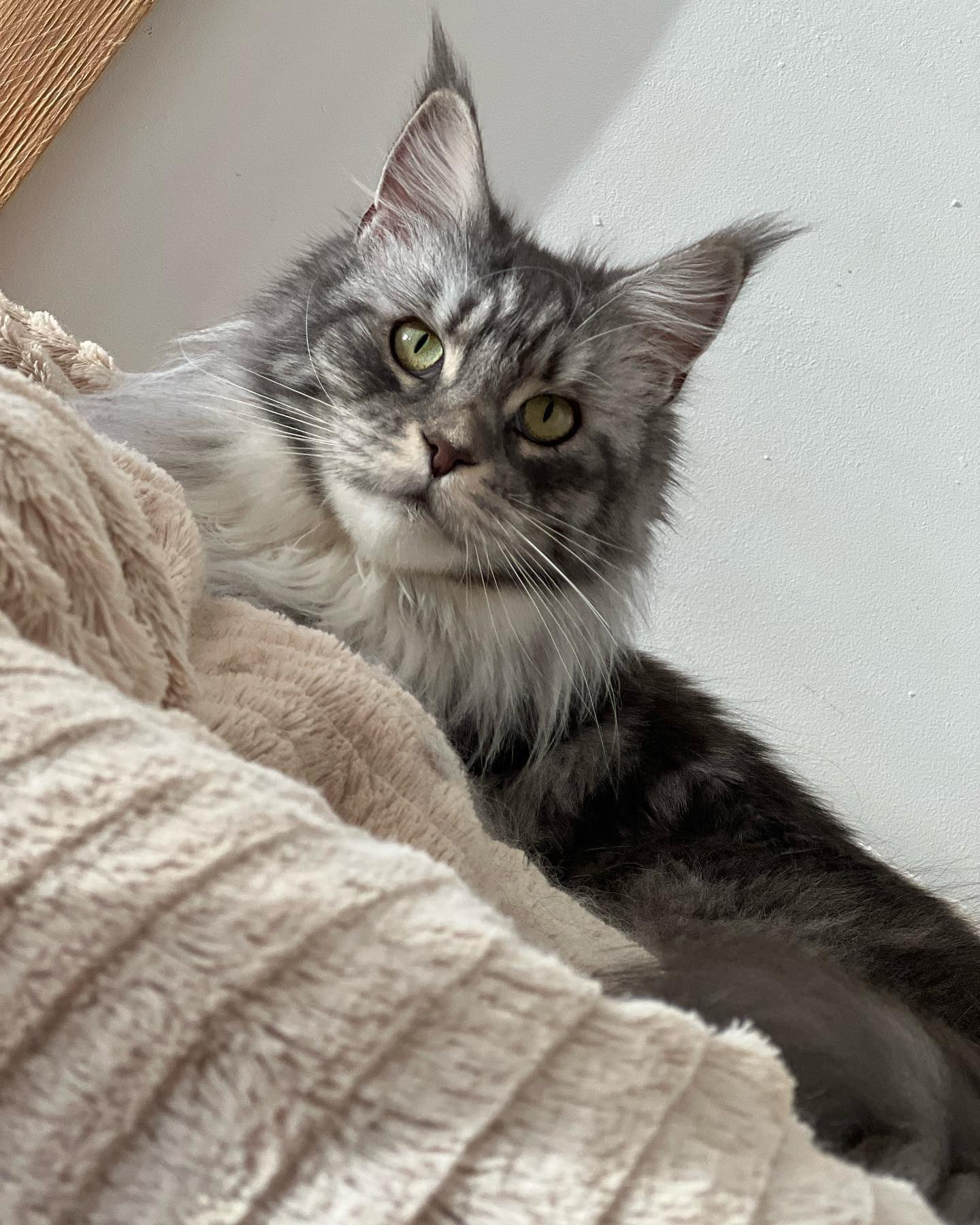 Rayban, listed in the LOOF,  is Blue 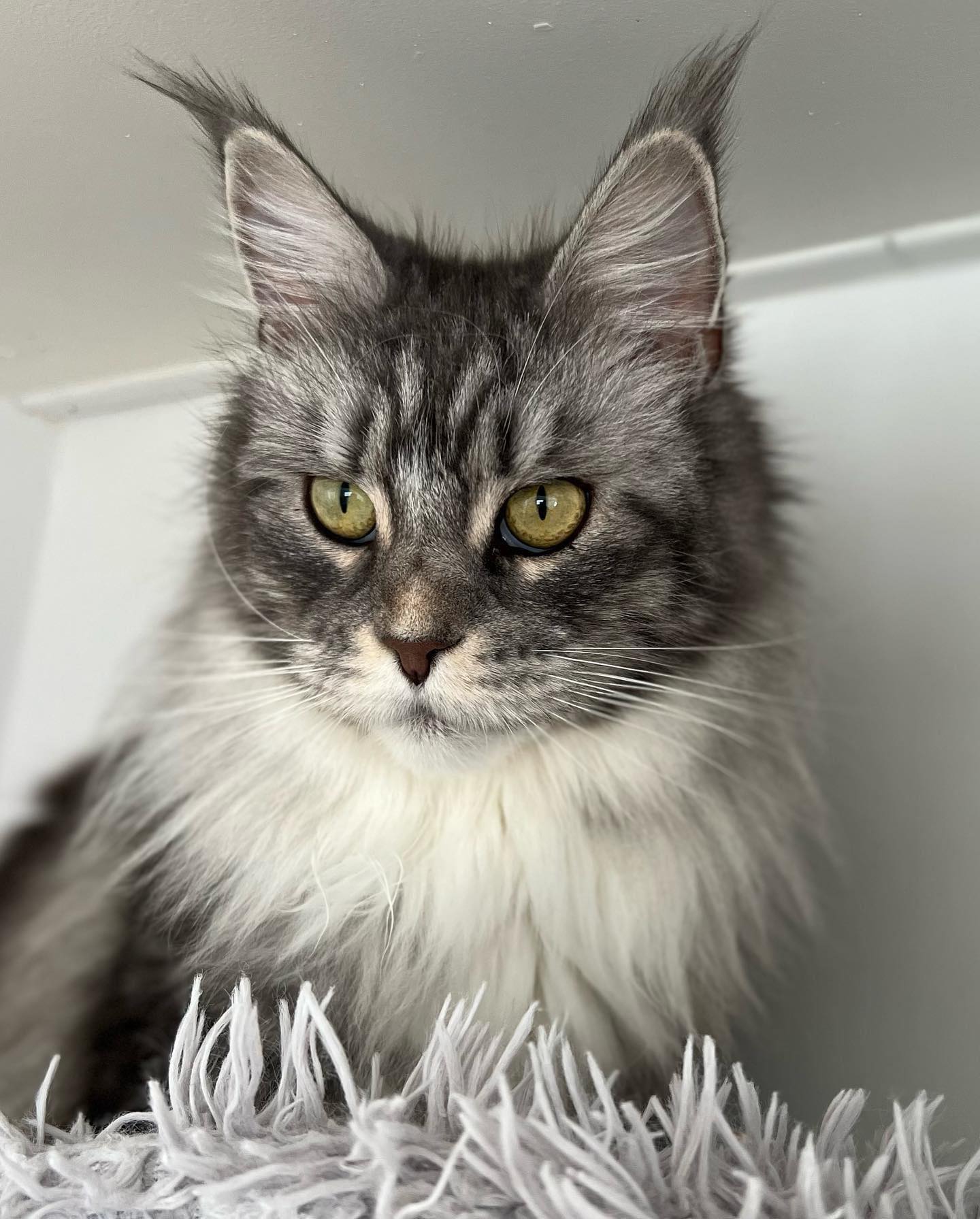 Silver Blotched Tabby and White.  She is Rymel's sister so all equally extraordinary, she has the same wild look and she is also extraordinarily beautiful...  It is of a superb size. Rayban is beautiful, elegant and generous, she has absolutely everything to please.  She is from the Maine d'Abolta estate and comes from parents of a prestigious lineage as well as many France, international and European Champions (her mother Perle de la croix Lorraine and her father Obiwan of the soultant coons). From sublime lineages selected for several generations for their great beauty.

Rayban is a gentle female , endearing a real purr box. She is also very calm and her generous character makes her give her a lot of affection, a real little pearl of sweetness and love. 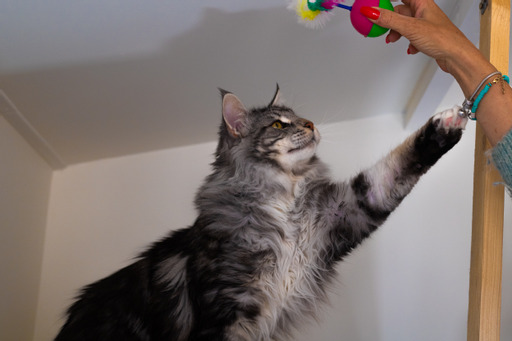 Rouky of the Lion Guard is a male LOOF, prestigious origins (grandparents selected 2016 N3), endowed with an 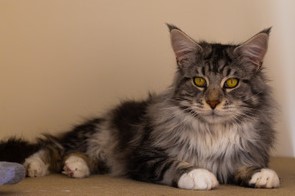 exceptional character.  He is black silver mackerel tabby and white and has an excellent pedigree. He has an impressive musculature inherited from his father Malory Magic Beauté, his strong chin, square muzzle and big cat look makes him a Maine coon as we like them.  Despite its size, it is a big peaceful cat, its kindness showing in its very gentle look, and we can say that it is as good as it is big! 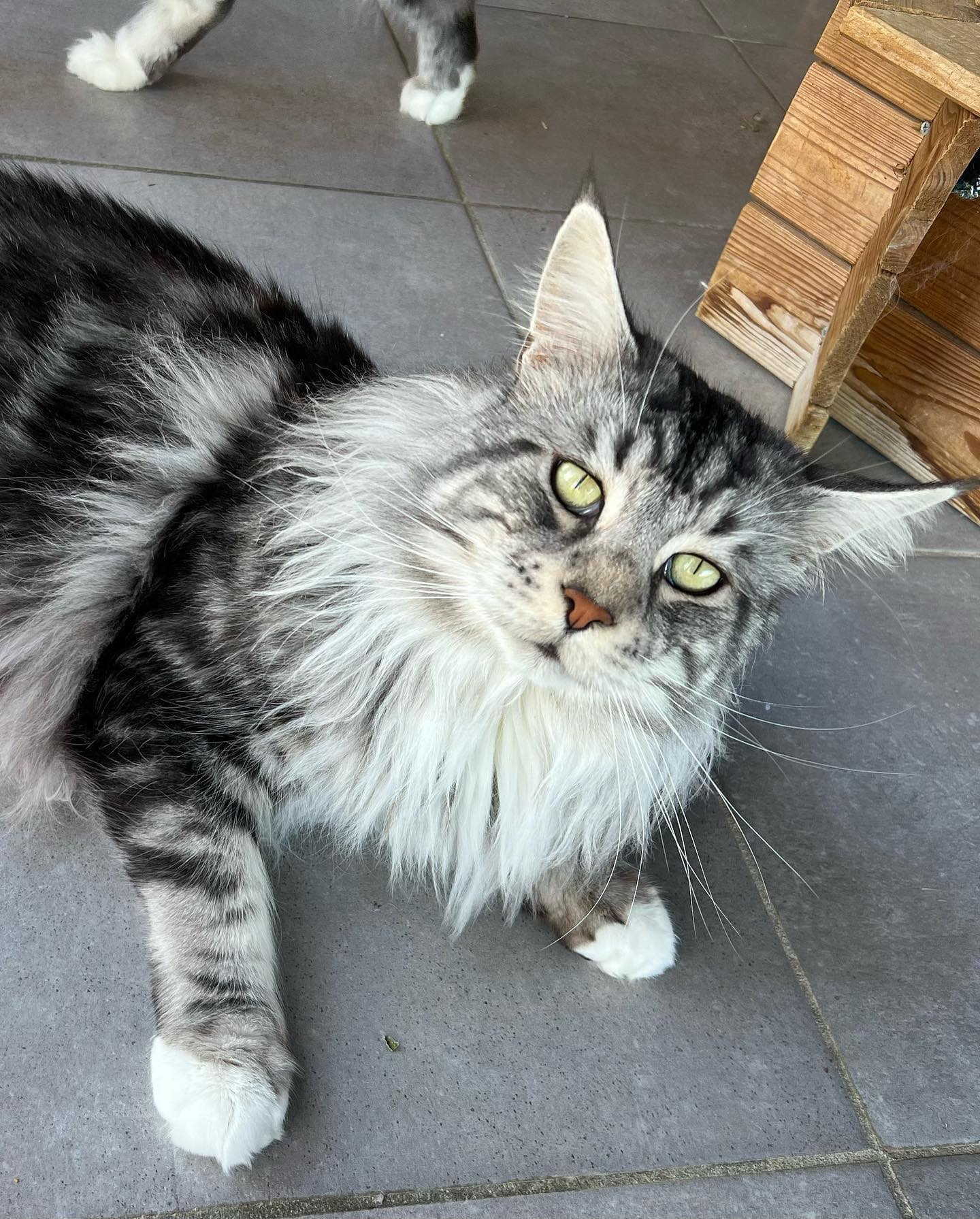