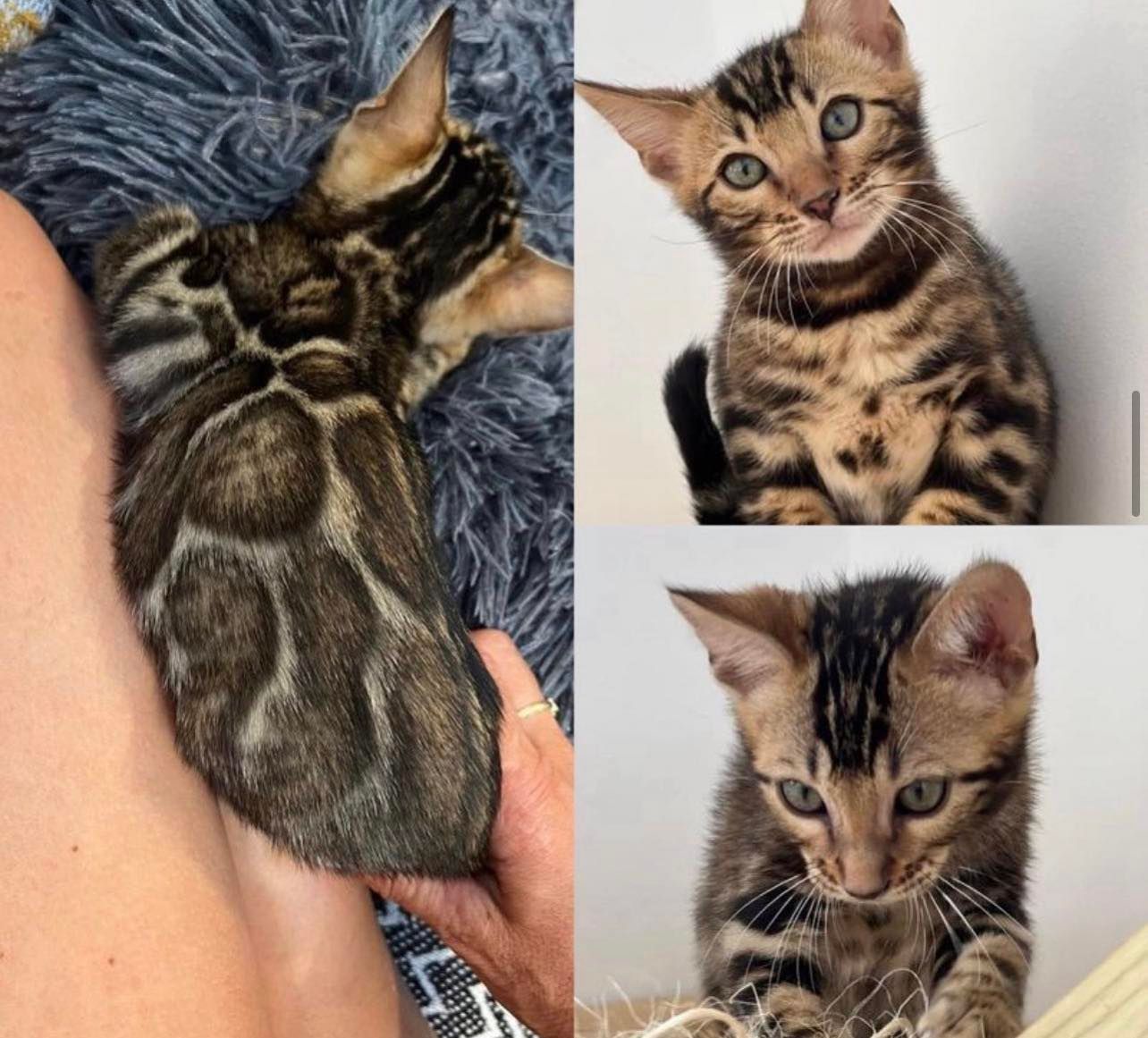 Bengal is the result of the cross between a domestic cat and the leopard cat (Prionailurus bengalensis), a small wild cat found in Asia and especially in the province of Bengal. It was in 1963 that for the first time we crossed domestic cat and wild feline. It was an American, Jean S. Mill, geneticist, who made the cross and chose a black cat of the American shorthair breed.From this cross came the hybrids called "F1" (1st generation) then "F2" (2nd generation), semi-wild cats. Bengal cats called "domestic" belong at least to the 4th and 5th generations. They can then participate in competitions or exhibitions and be sold to individuals.Since 1963, a selection work has taken place to keep the wild appearance of the Bengal Leopard Cat but having the character of domestic cat. Jean S. Mill was helped by the University of California, Davis, which provided him with eight females from the same cross for feline leukosis research. There were also crosses with Egyptian Mau, Burmese and Siamese in order to fix certain physical characteristics and not to fall into too much inbreeding. It was not until 1985 that Jean S. Mill was able to present one of his cats on display. The success was immediate and TICA quickly recognized the breed as a "new breed" in 1986 and allowed it to enter the championship in 1994. 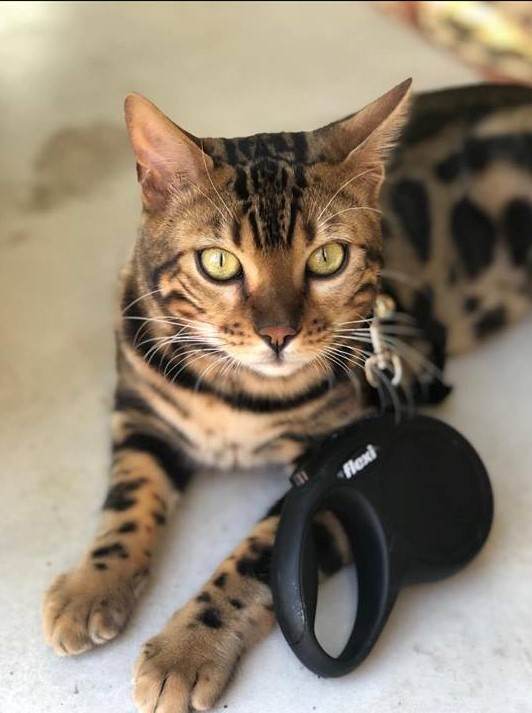 Meanwhile, in 1989, the first Bengal arrived in France, directly imported from the breeding of Jean S. Mill1. She is a female and soon three males join her. The first French litter was born in 1993 and French breeding in Bengal began. The LOOF recognized the breed a few years later, in 1997. England hosted its first Bengals in 1991. In 2009, the CFA does not yet recognize the breed while FIFÉ has done so recently. From now on, crosses with Bengal Leopard Cats are no longer allowed. 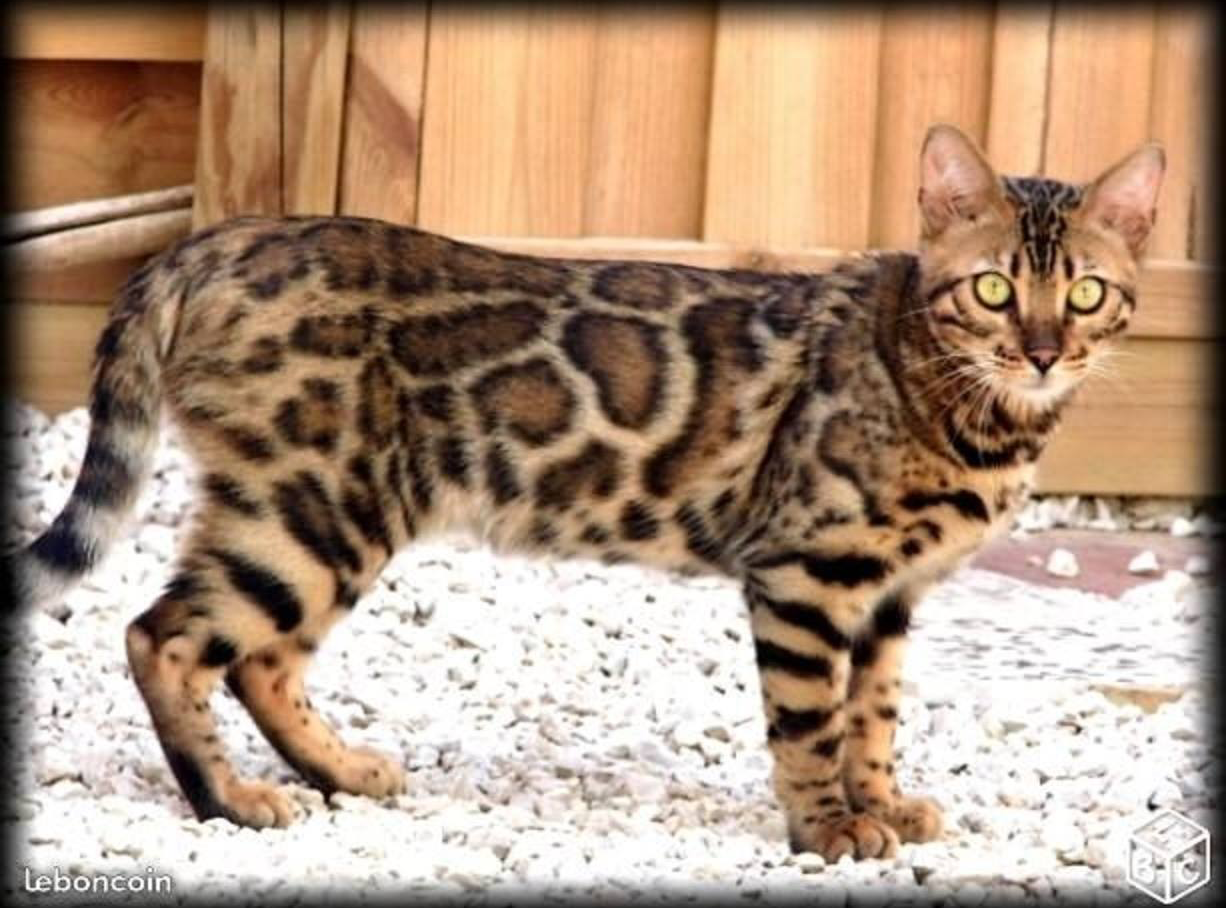 The Bengal, resulting from crosses between wild and domestic cats, has kept, over its evolution, its Leopard stripes. It is an affectionate cat, very active and playful. He does not exude any hint of aggressiveness and never shows it. He is of medium size, with an advantageous physique, rather sporty, graceful. Also very sensitive, the Bengal is distinguished by its great curiosity. It adapts to any environment but needs space for its well-being. Female From 4 kg to 6 kg From 35 cm to 35 cm / Male From 5 kg to 7 kg From 35 cm to 35 cm 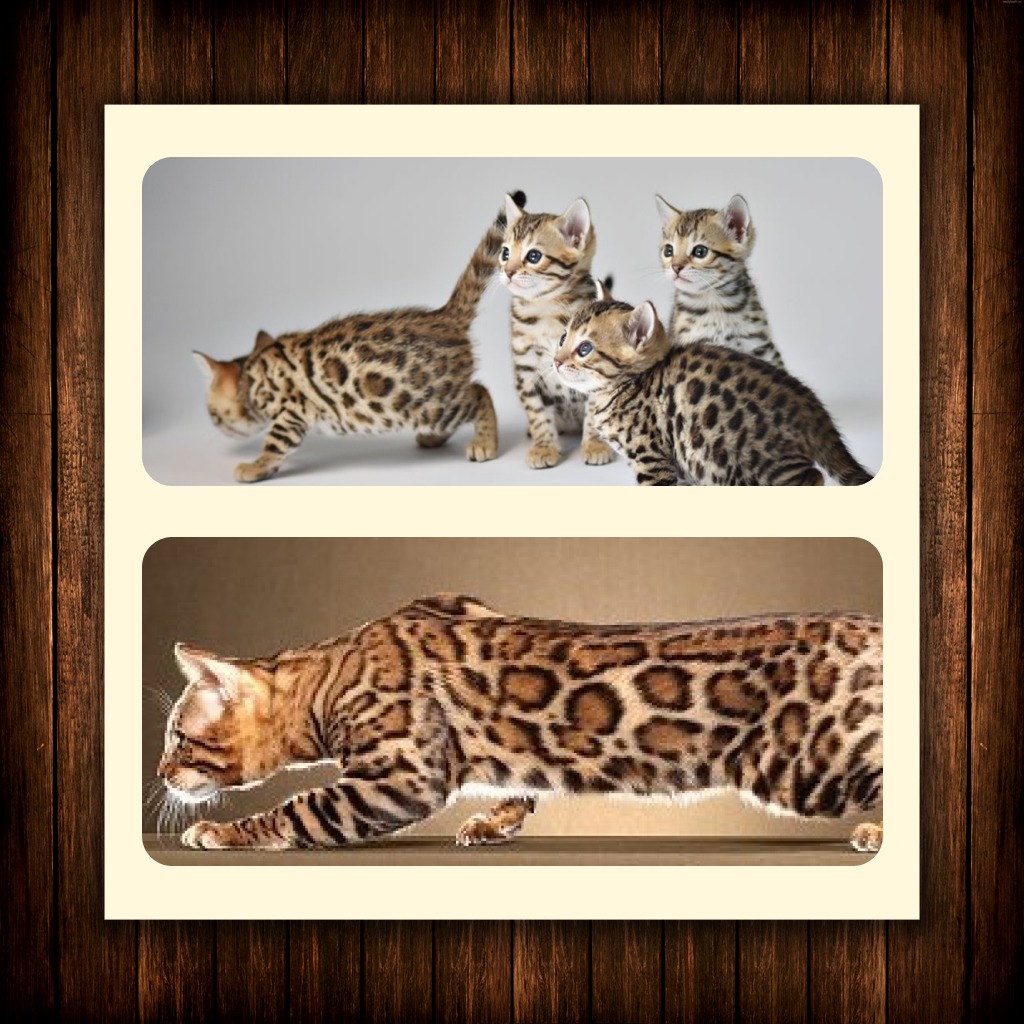 Kitten Brown Tabby pattern Rosettes / Spooted, male or female: from 1490 to 1990€ depending on the dress. You will find availability, by clicking on the tab book then reach Bengal, (online booking, secure site). You have the possibility to pre-reserve your kitten on the next litter by contacting me. (the Contact tab - Form or direct line). This pre-booking is made by paying a deposit of 30%. This one, will also give you the advantage of the first choice on the scope.   Book a Bengal kitten 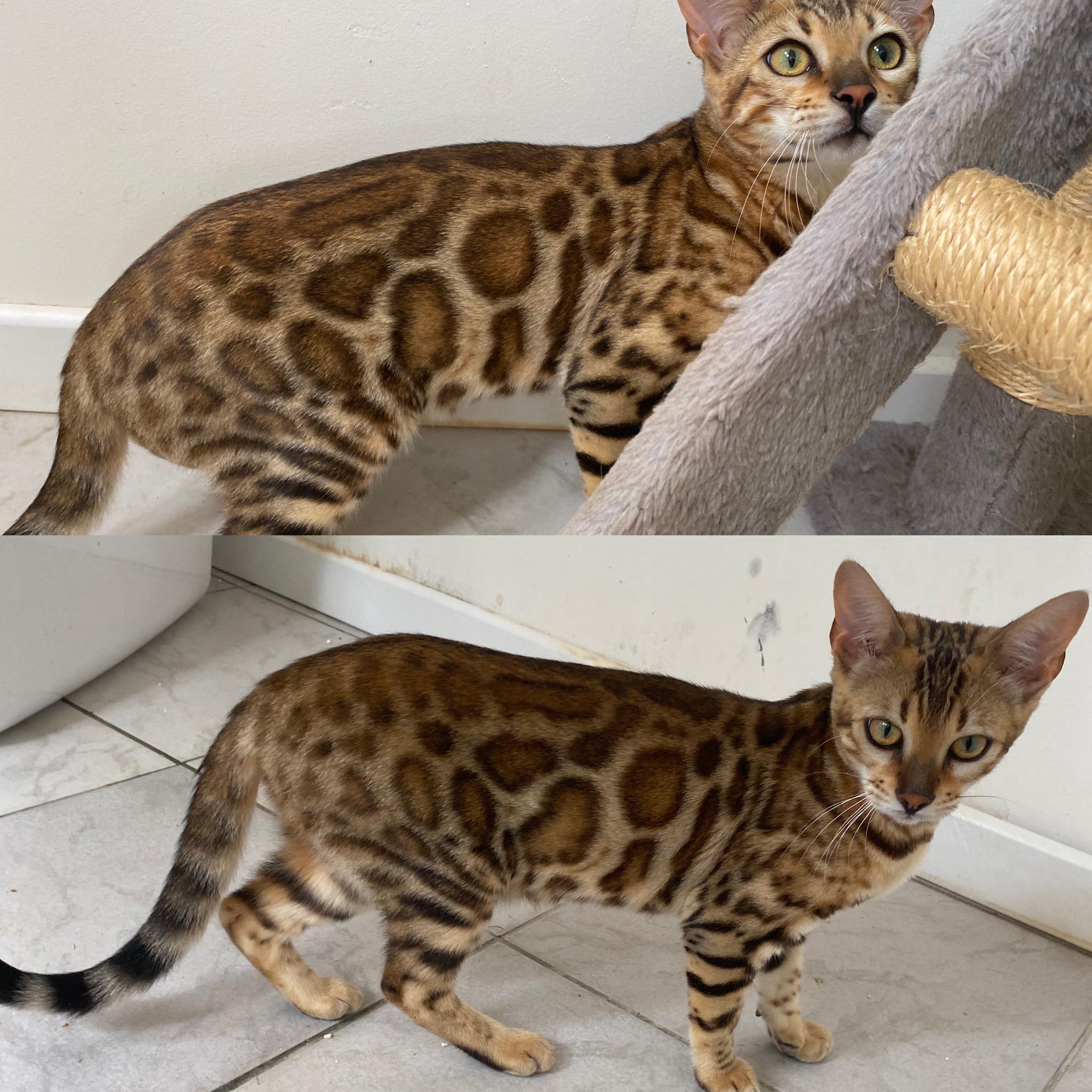 Savannah, registered in the LOOF, is brown tabby rosette pattern,  it comes from  parents of a prestigious lineage. His mother Nougat from the Blue Monoï estate, compliant 2017 (N2) and his dad Mi choco from the Bengal domain of Califasia, from the greatest Canadian and American lineages of the moment. Very good quality of set rosettes (rosettes selected over several generations). They are both brown tabby to rosette. 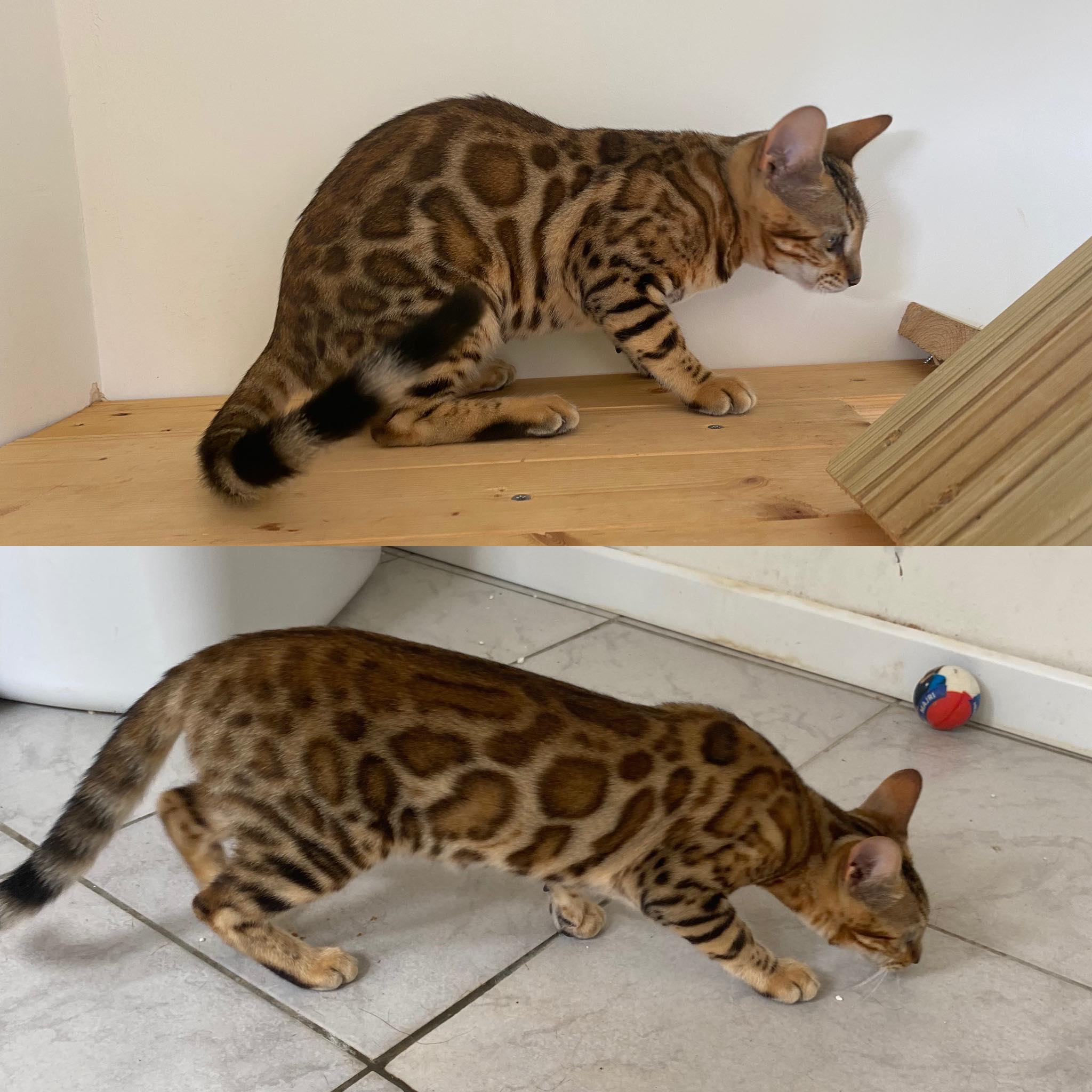 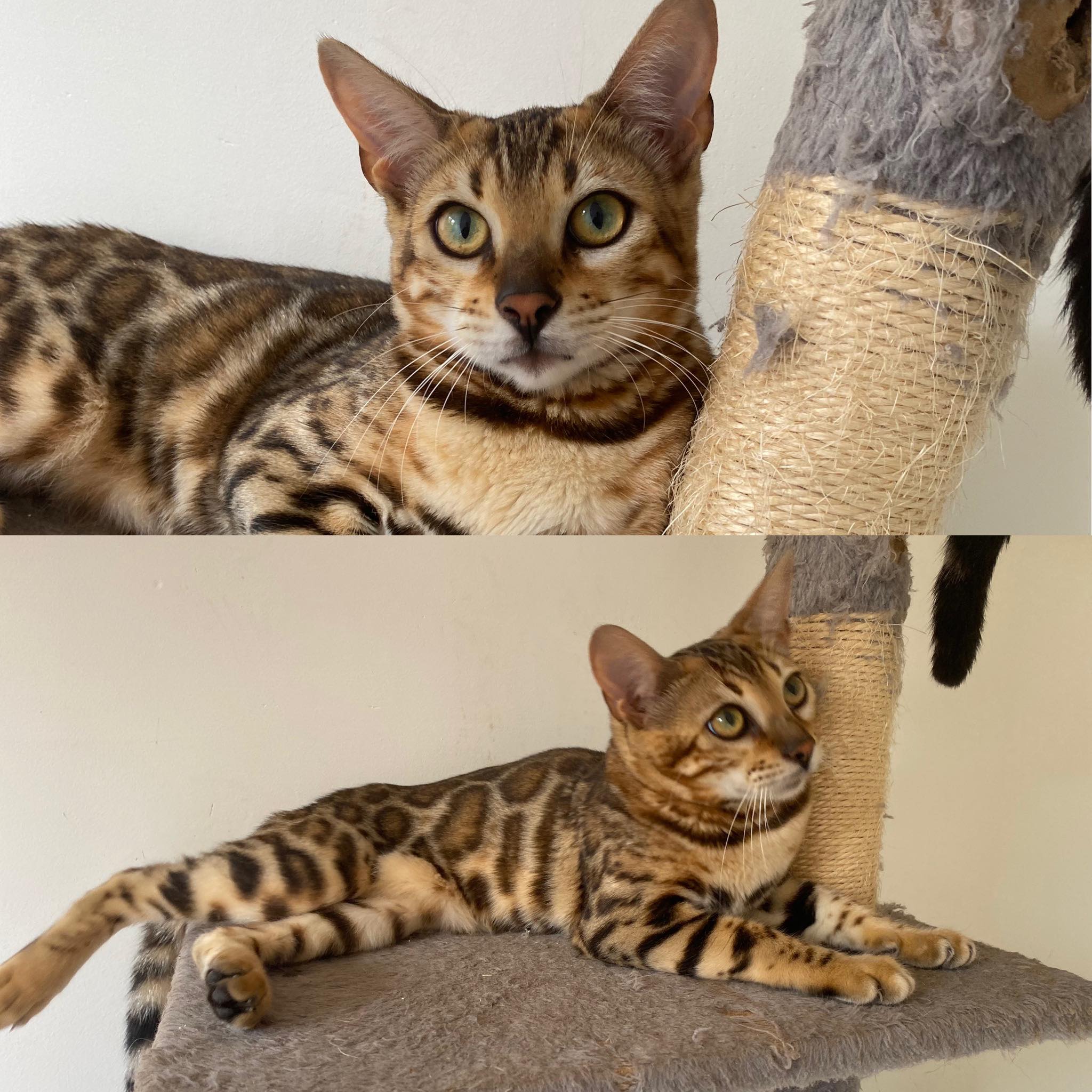 Savannah has a beautiful dress with very beautiful and large rosettes set, very well drawn and very contrasting. Typical of this fascinating breed! She is a curious, vivacious and adventurous female and very playful. She is also super cuddly and very close to me. pkdef N/N IVF and felv negative test. 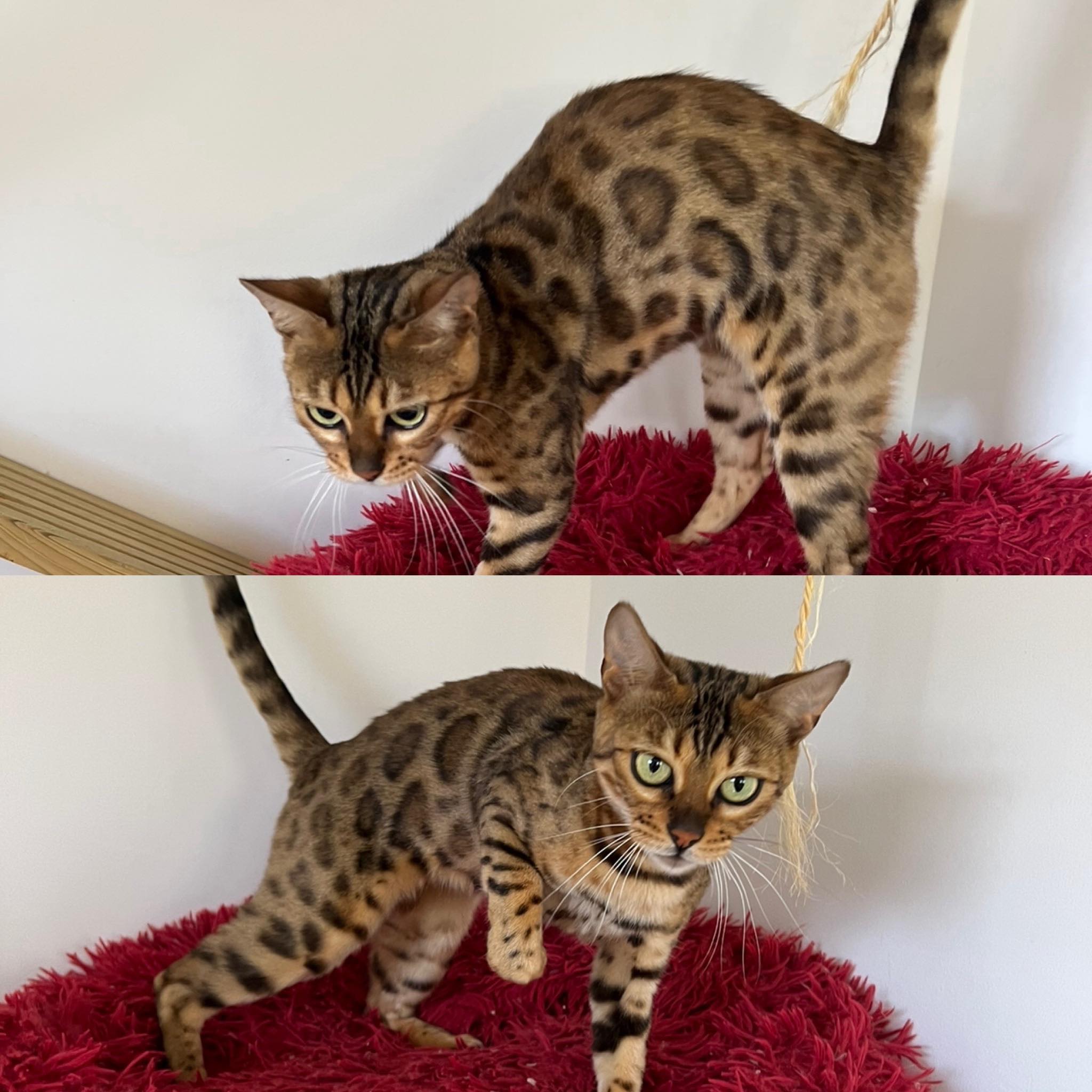 Priska is registered in the LOF, it is color brow 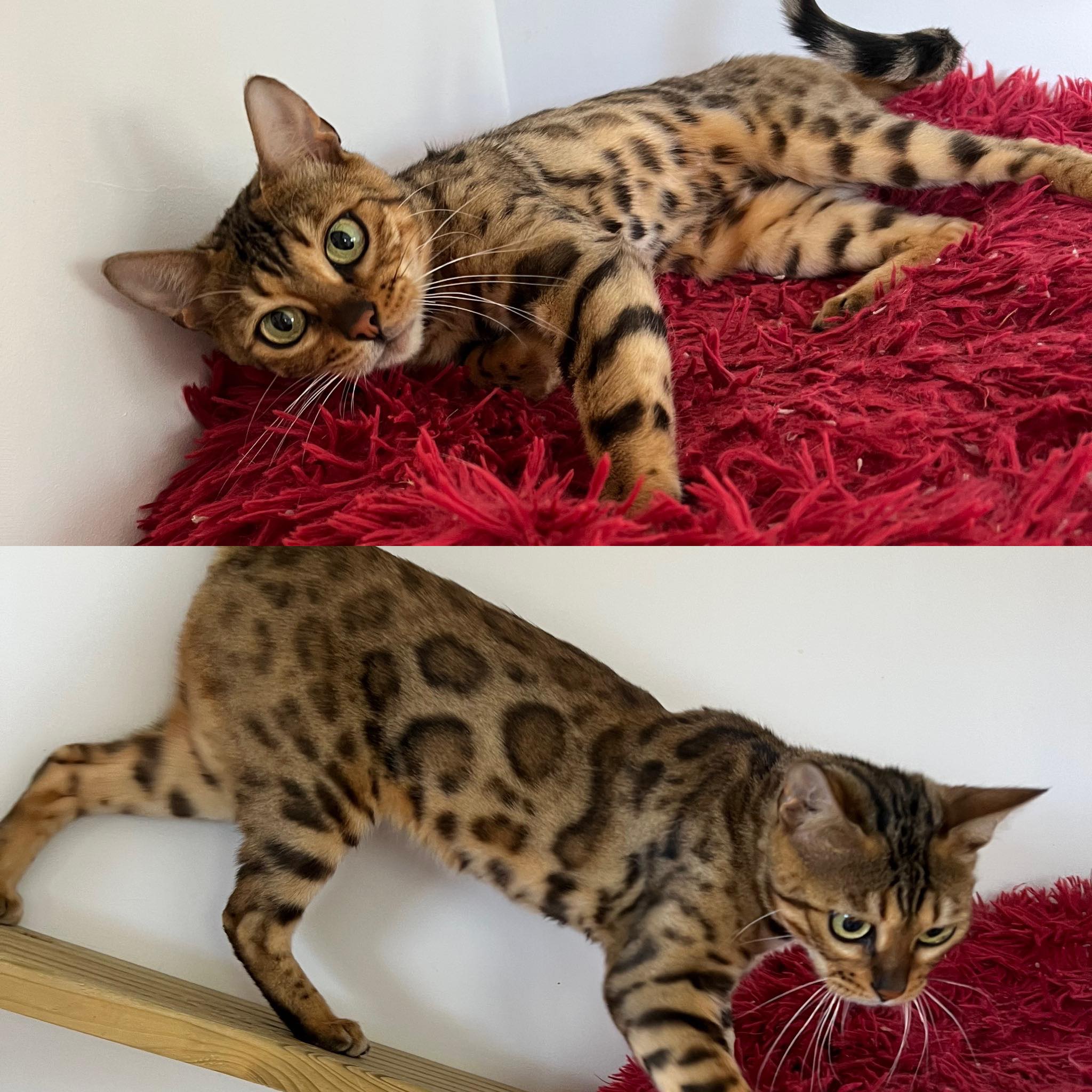 n tabby pattern spooted rosettes, very beautiful drawings and excellent contrast. Priska comes from my breeding of the marriage of Nougat of Blue monoi selected 2017 and Mi Choco of the Califasia estate itself from a prestigious lineage and wears it on its contrasting dress, the huge rosettes of its ancestors, its parents are from the greatest Canadian and American lines of the moment. Very good quality of set rosettes (rosettes selected over several generations).

Priska is an intelligent female, very curious and confident, she mixes strength, grace and kindness. Her wild look associated with a character that is only softness and purr she is very close to me. Test pkdef N/N IVF and felv negative. 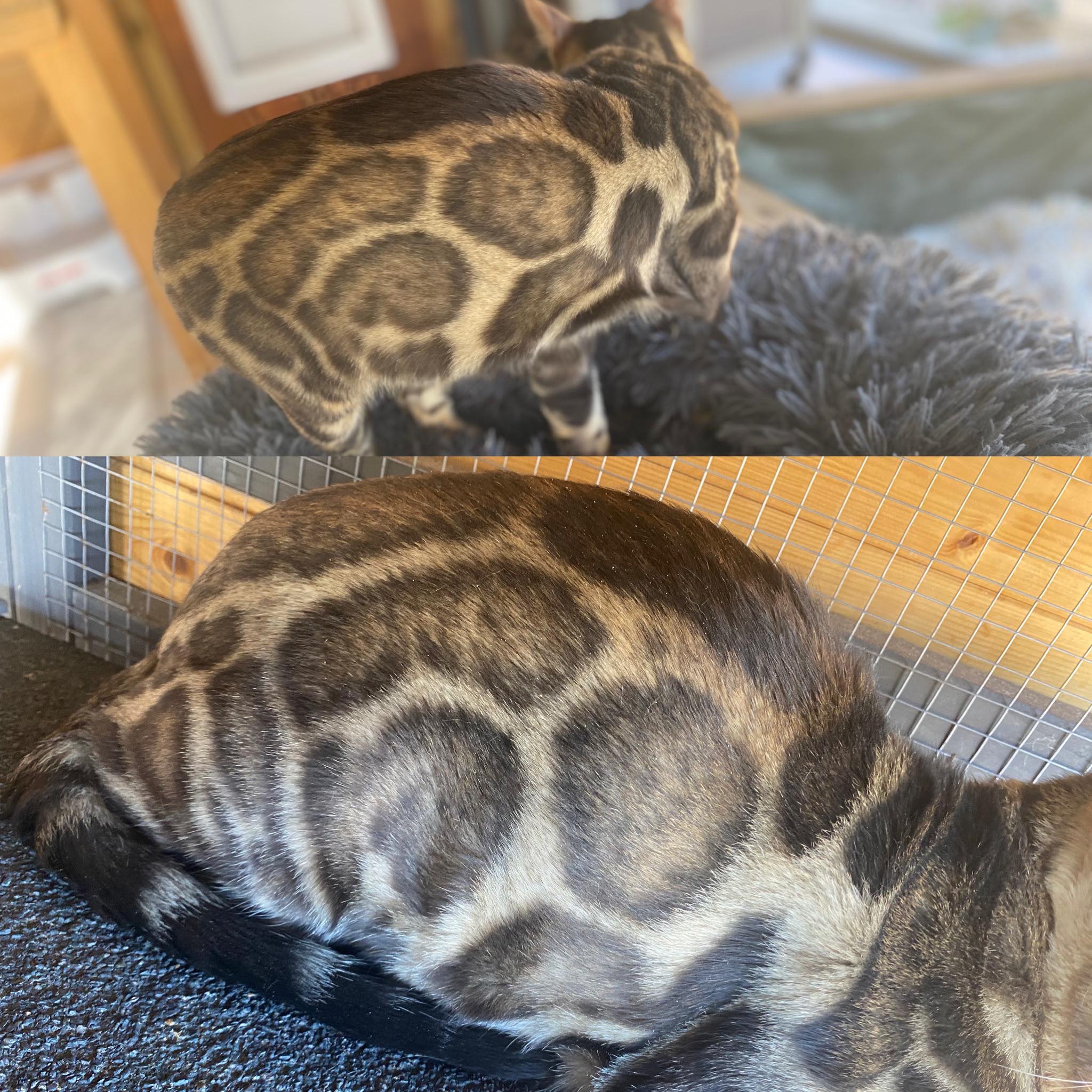 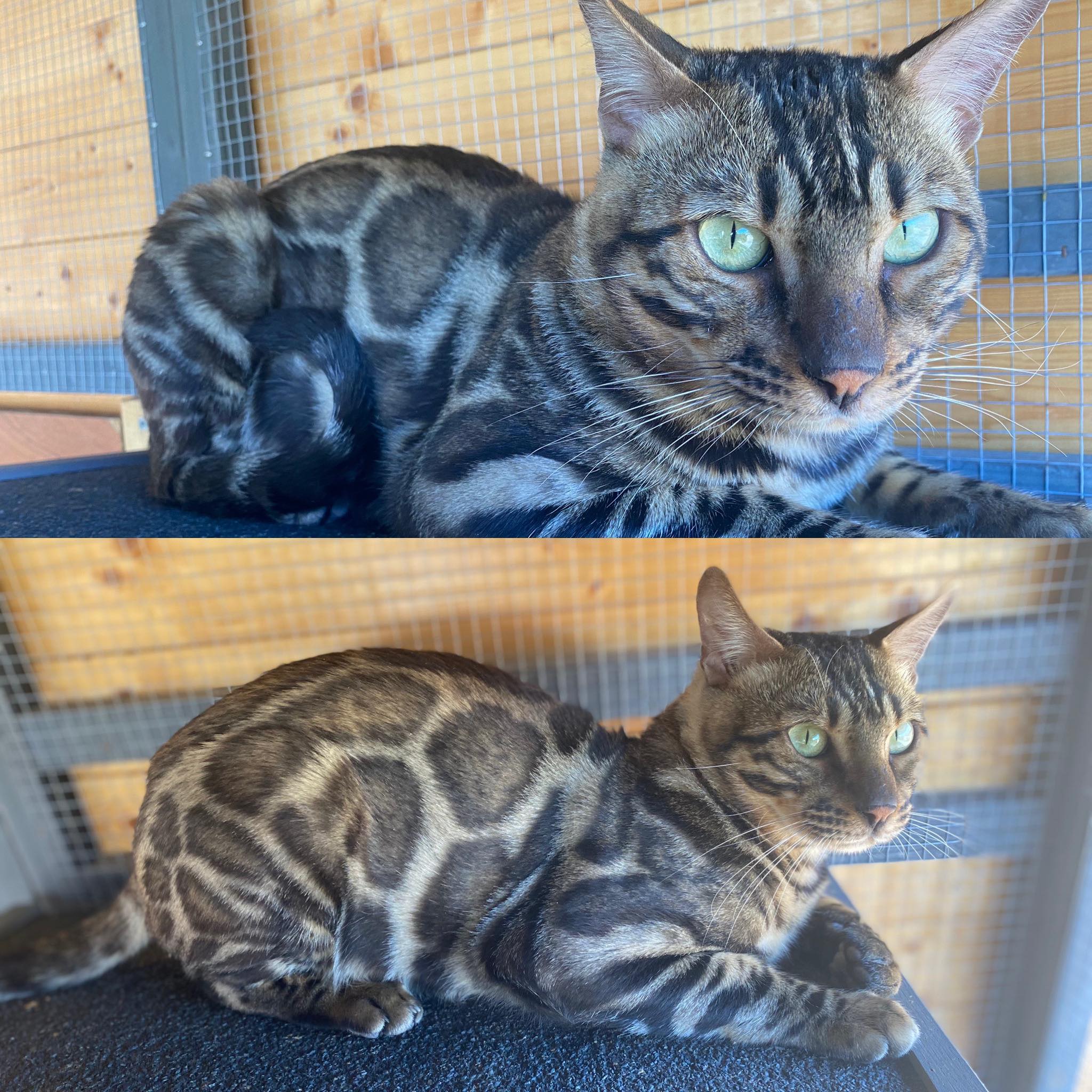 Rasta, registered in the LOOF, of the domain of KEDOCHA ROUAH is brown   tabby pattern spooted / rosette. RASTA comes from a Mi choco comes from a  prestigious lineage and wears it on its contrasting dress, the huge rosettes of its ancestors, its parents are from the greatest Russian lineages of the moment.      Very good quality of set rosettes (rosettes selected over several generations). The father (SPARKLERPRIDE YAHOO OF THEORIGINALES) AND THE MOTHER (OVEAH DE KEDOCHA ROUAH) HAVE CHAMPIONSHIP TITLES AND IN THEIR PEDIGREES CHAMPIONS, European and world champions, sublime origins. It has a superb contrast that accentuates the setting of its  huge closed rosettes on a bright Brown dress background.

Rasta is a placid male but also is very talkative, playful, curious, cuddly and very close to me. tested IVF/FELV.. TEST pkdef N/N. RASTA is very good breeder and dad repeatedly. I would only accept females up to date with their vaccinations and negative felv/fiv test. Pkdef N/N IVF test and negative felv.